Melbourne, Australia, 13 February 2021 – South Africa’s Lloyd Harris lost in straight sets to American wildcard Mackenzie Mcdonald in the third round of the men’s singles at the Australian Open, in Melbourne, on Saturday. 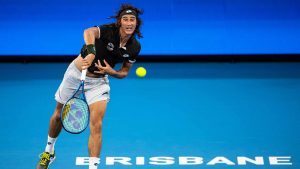 McDonald has matched his best Grand Slam result by reaching the round of 16 at the Australian Open when he beat Harris 7-6 (9/7), 6-1, 6-4 in a match which lasted a minute over two hours.
The American hit 12 aces compared to Harris’ 9 and also 39 winners against the Capetonian’s 33.
After a long tussle in the opening set which McDonald won in a tiebreak, the American former top-60 player took charge in the second set with Harris getting just one game on the board as he went down 6-1.
From there, McDonald proved too strong for the 91st ranked South African.
On Thursday, Harris defeated Australian Alexei Popyrin in a three-hour epic to reach the Australian Open third round, his first ever Grand Slam round of 32 appearance.
Later in the day, Harris and his Austrian partner Julian Knowle were knocked out in the first round of the men’s doubles by Thanasi Kokkinakis and Nick Kyrgios 6-2, 6-4.

MEDIA STATEMENT BY THE MINISTER OF POLICE