WESTERN CAPE – Wonder Mgude (35) from Langa, Cape Town has been sentenced to an effective three and half years behind bars for various charges of fraud, forgery and contravening the Electronic Communications and Transaction Act.
Mgude a convicted fraudster appeared in the Bellville Serious Commercial Crime Court on Wednesday 21 April 2021 and was found guilty as charged on over 185 counts. 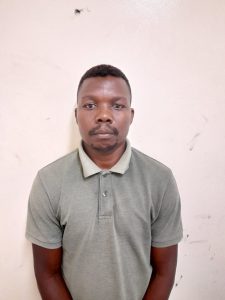 Mgude was rearrested on the afternoon of Wednesday 06 January 2021 in Stikland by the Hawks’ Serious Commercial Crime Investigation team. He was initially arrested on 02 October 2017 at a Caltex Garage, Airport City outside of Cape Town whilst he was reportedly persuading a motorist to pay him cash in return of using a counterfeit garage card to fill-up the said motorist’s fuel. A petrol attendant raised the alarm after he noticed that the card was in fact fake. This resulted in Mgude being arrested but not before he tried to flee on foot leaving his vehicle that was parked at the fuel station behind.

The resultant search of his vehicle uncovered about 18 counterfeit bank cards, papers containing numerous card numbers, a card reader writer/encoding machine as well as a laptop. He was consequently granted bail by the Bishop Lavis Magistrate’s Court. Whilst he was out on bail he was arrested again at BP Rondebosch Motors on 25 October 2017 for a same modus operandi. Two counterfeit bank cards were found in his possession.

The Wynberg Magistrate’s Court subsequently granted him bail with both cases centralized and transferred to the Serious Commercial Court. The trial date was set for 31 January 2019. Mgude absconded court proceedings resulting in a Warrant for his arrest being issued on 04 March 2019.
The court has sentenced Mgude to two 12 months terms respectively on 24 counts of contravening the ECT Act, and 17 counts of forgery which is set to run concurrently. For the 144 counts of fraud he was sentenced to seven and half years of which 5 years is suspended. He is set to serve an effective three and half years jail term.

Gains in fight to control yellow fever outbreak: but response must continue