NORTH WEST – Two suspects aged 30 and 38 were arrested in a joint operation on Thursday in Rustenburg by members of Serious Organised Crime Investigation assisted by members of Public Order Policing unit, and the Department of Mineral Resources for illegal mining.

The suspects were allegedly found mining illegally using excavators. They however had no environmental authorisation issued by the Department of Mineral Resources. 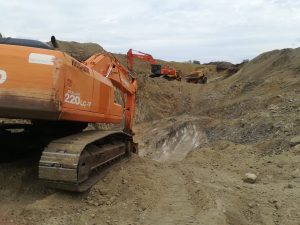 They were arrested and charged with contravention of Section 24F (1)(a) and Section 49A (1)(a) of National Environmental Management Act (NEMA) 107/1998 for commencing with a listed activity without environmental authorisation issued by the Department of Mineral Resources.

Meanwhile in a separate incident on Tuesday, eight suspects aged between 33 and 47 were also arrested for illegal mining after they were found mining illegally with excavators and trucks in Rustenburg.

All suspects will appear before the Rustenburg Magistrate’s Court on 14 December 2020.

The Directorate for Priority Crime Investigation would like to send a stern warning to contractors who rent out their earth moving equipment to illegal miners that, any equipment found to be utilised in illegal mining activities will be seized for investigation.

Another Ace Served By Raven Klaasen

15 YEARS IMPRISONMENT FOR POSSESSION OF EXPLOSIVES

SAPS RESTRUCTURING PROCESS TO SEE MORE OFFICERS ON THE GROUND

HAWKS ARREST ONE OF THEIR OWN