Pretoria, South Africa, 10 December 2020 – Tennis South Africa, and the wider local and international tennis community, mourns the loss of Gordon Forbes, who passed away on Wednesday, at the age of 86. 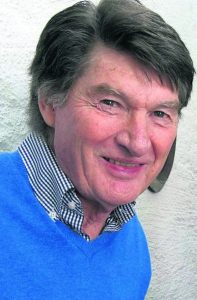 Forbes was born on a farm near Burgersdorp in the Eastern Cape in 1934 and sadly passed away in Plettenberg Bay due to COVID-19 complications.
Forbes was a superb tennis player, among the best in the world in the 1950s and ’60s. He began life on the farm where he learnt to play the game on a sand court and won his first junior tournament at the age of 12 in East London. He came to Johannesburg in 1952 to take part in the trial matches for the Davis Cup team where he says he “felt diminished by my lack of worldliness and the unruly state of my game.”
It was at these trials that he met Abe Segal and his game duly took off. He formed a lifelong friendship with Abe off the court and formed a formidable partnership on the court. They played Davis Cup together from 1955 to 1963 winning 9 of their eleven ties and helped South Africa reach the semi-finals of the European Zone group in 1962 and 1963. Gordon played 14 ties in all with a 20-11 win/loss ratio. In that era, they were considered one of the best doubles combination on the circuit.
Together they were runners up at Roland Garros in 1963 losing to Roy Emerson and Manuel Santana; semi-finals at Wimbledon and twice won the British hard-court title. Gordon won Roland Garros mixed title with the American Darlene Hard in 1955. In the singles, he reached the quarter final of the US Open and the 4th round at Wimbledon.
Gordon was SA Open champion twice, 1959 and 1961 and was runner up in 1955 and from 1962-1964.
When South African tennis unified in the early 1990’s, Gordon was on the board that facilitated this merger to form the unified SA Tennis.
Once he hung up his racquet, Forbes carved out a second career as a best-selling author. Perhaps he will be remembered for his writing about the game as much as, if not more, than his playing. His first book, A Handful of Summers was published in 1979 and is still regarded as one of the best books ever written on tennis. He recalls his early life on the farm, his meeting with Abe Segal when he arrived in Johannesburg and their experiences of playing against and mixing with the game’s greats in the 1950’s and 1960’s.
Joel Drucker describes the book as “This book primarily covers the decades of Forbes’ playing career in tennis bygone amateur era – a time of lively personalities, eclectic facilities, housing at homes of club members and various forms of hijinks. With compassion and insight, Forbes brought to life such tennis folk as a hearty Roy Emerson, the ethereal Torben Ulrich, the daffy Art Larsen and a host of others that comprised the fairly insular and largely uncompensated travelling circus.”
Gordon followed this book with “Too soon to Panic” in 1995 and three years ago published a memoir “I’ll take the Sunnyside.”
Gordon leaves his wife Frances, son Gavin and daughter Ashley, to whom we extend our condolences and heartfelt sympathies.

Bitter medicine could have been avoided had strikes been curbed – CDP

#BeTheChange as you take to the roads over Easter period