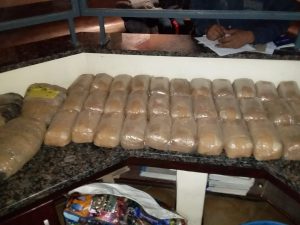 The first location was swooped on at 01:30 in the Marchand informal settlement where a 39 year old male was arrested and 281kg of dagga with an estimated street value of 2million rand was seized.

The last location was raided in the Hash Valley informal settlement in Kakamas where a 28 year old male was arrested for dealing in drugs and where mandrax tablets and TIK with a street value of R6 975-00 was seized.
The five(5) male suspects will soon appear in the Kakamas Magistrates court on charges of Dealing and Possession of drugs.

The Acting Provincial Commissioner, Maj Gen Johan Bean applauded the collective team for their relentless efforts in eradicating and removing drugs from society.

FORMER AREA MANAGER FOR KZN DEPARTMENT OF TRANSPORT IN COURT