POLOKWANE: 21 April 2021 – The police concerted efforts to fight the scourge of serious crimes and their quick response led to the arrest of one suspect and the recovery of a firearm and motor vehicle soon after a business robbery that allegedly took place at a Hardware in Gumbani village under Malamulele policing area today at about 10h00. 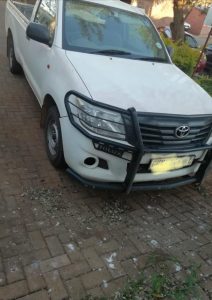 The police received information about a business robbery that has taken place at a local Hardware in which the suspects reportedly fled from the scene with the Complainant’s motor vehicle.

One of the suspects allegedly entered the Hardware and pretended to buy. He suddenly produced a firearm and demanded money. The second suspect also entered and they then robbed the complainant of cash money and a Toyota Hilux and fled from the scene.

The police reacted promptly and the said vehicle was spotted at Dzwerani village under Vuwani policing area. The suspects allegedly failed to stop when the police ordered them to do so. They then abandoned the vehicle and fled on foot, allegedly firing at the police. The police returned fire, fatally shooting one of the suspects and injuring the other.

One 9mm pistol and the Toyota bakkie were recovered. The injured suspect has been admitted in hospital under police guard. The recovered firearm will be subjected to ballistic examination to determine if it was previously used in the commission of other serious crimes.