In celebration of women’s month, the South African Police Service(SAPS) continues to celebrate its women who are consistently breaking barriers in a traditionally male environment. 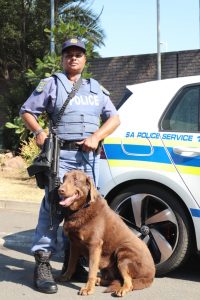 Today, we introduce the nation to Warrant Officer Cheryl Ellis. The forty-five-year-old member began her career in the SAPS as a police reservist in 1996. A police reservist is a member of the community who performs part-time policing functions or activities for SAPS on a voluntary basis without being paid.

In 1998, the member was enlisted as a police officer at the rank of Constable after undergoing the Basic Police Learning Development Programme (BPLDP) training at the SAPS Tshwane Academy in Pretoria. The member hails from Phoenix in Durban and is one of 147 female K-9 handlers in the organisation. The member with 23 years’ service is currently attached to the Durban K-9 unit. K-9 police officers are members who partner with highly-trained police dogs to execute policing duties.

As a K-9 narcotics handler, Warrant Officer Ellis utilises the skills of her furry friend to assist in the execution of certain duties, including drug detection and location of cocaine, heroin, mandrax, ecstasy, dagga, nyaope and crystal meth. K-9 members rely on their dogs to assist them in tasks requiring a more animalistic sense of location and speed. As a trained K-9 member, Warrant Officer Ellis must be able to communicate what her dog signals to other members during an operation.

Like Warrant Officer Ellis, members in this particular field must remain physically fit at all times to be able to maintain strength, stamina and speed required to pursue dangerous criminals while responding to Cash In Transit(CIT)heists, Hijackings, Armed Robbery cases as well as Business and House Robbery.

During her illustrious career as a narcotics K-9 handler, the member recalls an incident in which her K-9 assisted in the successful apprehension of a drug smuggler. “I remember when King Shaka International Airport re-opened just before the 2010 world cup, myself and the K-9 that i was working with at the time, were busy searching luggage when the dog reacted positively to a suitcase. We waited for an unidentified suspect to collect their luggage. Once picked up, we stopped the woman and took her in for questioning and further interrogation. The woman was found to be in possession of R2,7 million worth of cocaine wrapped around her body. The suspect was deported back to Brazil where she was wanted as a drug mule.” This success according to Ellis, would not have been achieved without the help of her K-9 whose senses sniffed out the drugs.

Over and above her daily responsibilities, Warrant Officer Ellis is the South African Police Service’s first Indian Female K-9 training instructor. In this role, the member educates and trains both male and female police officer’s to become dog handlers.

Her message to all female officers is to always believe in themselves. “Your first step will be the hardest but the rest will become easier as your journey starts. I believe you can achieve whatever you set your mind to do, as long as you work hard and stay committed”.

To Warrant Officer Ellis and all the female K-9 handlers in the SAPS, we thank you for your contribution in making South Africa a much safer place to live in.