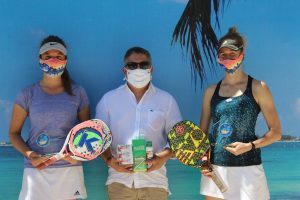 Following four days of exceptional tennis, it was Gauteng’s Herman Hendriks and Niel Hendriks that clinched the men’s title, and Niel Hendriks also bagging the mixed doubles title with Kyla Yelverton – also from Gauteng.
Herman and Niel staged a masterclass performance winning 7-5, 6-3 over former Davis Cup player Tucker Vorster and his partner Dewald Linde, meanwhile, Niel and Yelverton dismantled top seeds Frans Ledwaba and Helga Jeske 6-0, 6-2 to secure the mixed doubles title.
A day following her mixed doubles loss, Helga Jeske put up a fine performance alongside her partner Lisa Hibbers to clinch the women’s doubles crown. Jeske and Hibbers edged out Loetitia Lourens and Kyla Yelverton 6-3, 6-2 in the finals.
“TSA are very thankful to be able to host the National Beach Tennis Championships despite having to work around COVID-19. We are extremely thankful to the 70 participants that entered due to this being the first time that Nationals has been played in this particular format,” commented Beach Tennis Manager, Iain Smith.
“We are also very excited about the number of players from the historically disadvantage communities as we embark on increasing our footprint and taking beach tennis to all communities. In fact there is some raw talent that we have discovered amongst the junior participants which bodes well for the future.
“Finally, a big thank you to TSA, Clubview Tennis Club and Beach Sports club for their efforts and to Turbovite and JointEze for their product contribution to the player gifts and finalists,” added Smith.
Following the successful TSA Beach Tennis National Championships, winning teams will be considered for selection to represent South Africa in the World Championships in Brazil in October.
To determine the teams that will compete in the prestigious World Championships, the four semi-finalist teams in the men’s doubles and women’s doubles at the National Championships will qualify for a play-off competition.
The players qualifying for the play-offs will battle it out to earn their spots in the Southern Africa Regional Individual Championships to be played in South Africa in May 2021, with the winning nation qualifying for the World Championships in Brazil.
Final Results:
Mixed Doubles
[2]Niel Hendriks / Kyla Yelverton bt. [1]Frans Ledwaba / Helga Jeske 6-0 6-2
Mens Doubles
Herman Hendriks and Niel Hendriks bt. Dewald Linde / Tucker Vorster 7-5 6-3
Womens Doubles
Helga Jeske / Lisa Hibbers bt. Laetitia Lourens / Kyla Yelverton 6-3 6-2

RESULTS OF THE TSA JUNIOR MASTERS

SUSPECT TO APPEAR IN COURT FOR DEALING IN DAGGA

Motion Of No Confidence In The President

Police out in full force in Soweto