One suspect has been arrested while four alleged cash-in-transit robbers have succumbed to the gunshot wounds they sustained during a shootout with police in Katlegong. This follows a CIT robbery that occurred in Edison Street, Langlaagte Industrial this morning just after 07:00. 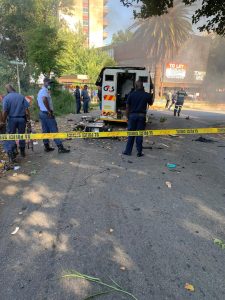 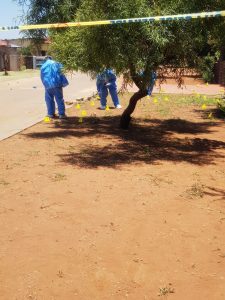 It is reported that this morning, a group of armed men allegedly used explosives to bomb an armoured vehicle in order to gain access to the safe. The suspect made off with undisclosed amount of money, leaving the vehicle they have used to ram the armoured vehicle off the road burning. One of the security guards was taken to hospital for treatment of a gunshot wound to the head.

National Crime Intelligence activated the SAPS Airwing, Limpopo and Mpumalanga Tracking Teams with assistance from EMPD Swat and JMPD K9 to trace the suspects. The information received led the Team to a safe house in Katlegong where the suspects tried to shoot their way out. One suspect was arrested while four others were fatally wounded. The Team has launched a manhunt for the suspects that managed to flee the scene.

Upon searching the premises, the Team recovered two police radios, an unlicensed firearm and two vehicles, one which had been hijacked in Katlegong last month and the other was hijacked in Sandton two weeks back.

The Directorate for Priority Crime Investigation will be investigating this case. The arrested suspect is due to appear in court soon facing charges of murder, attempted murder, armed robbery, possession of stolen vehicles, possession of prohibited firearm and ammunition.