NELSPRUIT – An Intelligence Driven Operation led to the arrest of a 36 year old man who was found with suspected stolen building material. 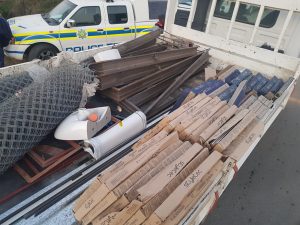 The arrest came after members of the Nelspruit Flying Squad operationalised information gathered by Crime Intelligent members about a man who was in possession of stolen goods in his house. The information led the members to Tinkomeni area in Pienaar at the house of the suspect where he was found in possession of different sorts of building material believed to have been robbed from Hardware PNL in Pienaar Lehawu area. The value of the stolen items is yet to be calculated by the owner.

All the stolen items were found hidden in the suspect’s garage and he could not produce proof of payment thereof hence he was arrested.

The suspect was charged for being in possession of suspected stolen property and he is expected to appear today on 22 July 2021, at the Kanyamazane Magistrate’s Court.

Police have uncovered that this case is linked with other two cases where three people were also found red-handed inside the same hardware and were arrested. They are currently standing accused of cases related to business burglary and have already appeared before the same court where their matters were remanded to a later date.

The Provincial Commissioner of the South African Police Service in Mpumalanga, Lieutenant General Semakaleng Manamela has welcomed the arrest.

IFP: CALLS FOR AN INDABA TO STOP CHILD MURDERS

SAPS investigating circumstances of fatal shooting of constable in Katlehong

PUBLIC URGED TO BE CAUTIOUS OF ONLINE VEHICLE ADVERTISEMENTS