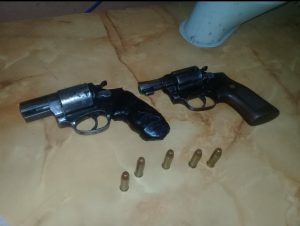 Mpumalanga Province, today appeared in Praktiseer magistrate court on charges of burglary business. This after they were arrested on Friday morning, 25 June 2021 during a snap operation that was conducted by members of Crime Intelligence, Tubatse VISPOL and Detectives, following the incidents of burglaries at several schools in Tubatse policing area.

The Police received information about the said suspects who were planning to commit further burglaries in the area. The team managed to intercept the two men driving in a white Isuzu bakkie with false registration numbers. The suspects were found in possession of the following items that were allegedly stolen from Mkoloba Primary School:

The suspects were also found in possession of two (02) .38 Special revolvers with serial numbers filed off and five rounds of ammunition. The Isuzu bakkie was also confiscated.

The Provincial Commissioner of Police in Limpopo Lieutenant General Thembi Hadebe has commended the members for accurately operationalising the information received and arrested the suspects. “These arrests and the linkages that were made, will go a long way in eradicating burglaries at School and other premises”, concluded Lieutenant General Hadebe.

The suspects have already been positively linked with burglary incidents at the above mentioned schools and were remanded in custody until 01 July 2021 for formal bail application. Police investigations are continuing.

ANOTHER EXECUTIVE APPREHENDED FOR MILLIONS IN TENDER SCAM

TENNIS SA SUSPENDS ALL TENNIS TOURNAMENTS UNTIL 20TH OF APRIL

Your health is in your hands