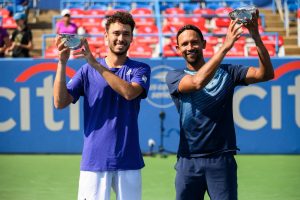 The fourth seeded pair overcame second seeds British Neal Skupski and Michael Venus of New Zealand 7-6(4), 6-4 to lift the ATP 500 title.
Klaasen and McLachlan did not drop a set this week en route to their second ATP Tour title as a team – they also won the 2020 Cologne-2 in Germany together.
“Yeah, I mean, fantastic,” defending champion Klaasen told ASAP Sports. “Ben and I have had a long season. We’ve had couple of big wins. To finally get over the hump, we have lost a couple of semis, it’s nice to finish things off. Especially in Washington kind of where we were defending. I had won the title in 2019. It was nice to come out here and do it again.
“He (Ben McLachlan) carried me the first set, for sure. I thought we had a good start and unfortunately went down a break. Second set we were hanging on for dear life. We probably were the worse team in the second set, but being together for more than a year now, the experience helps and hopefully we can build on that.”
Klaasen added, “I mean, with this scoring system, you know that things can change in a heartbeat. We have been on the receiving end of some tough losses from that position, and we knew that if we kind of hang tough mentally, to close out the set is quite difficult, I think.
“We made a couple of key returns at the right moment to keep us alive. That’s the mental challenge, trying to stay alive mentally when things aren’t going your way. Fortunately, today it worked out for us. Sometimes it doesn’t, but with experience, you learn that you’ve got to hang in there till the end of the set. Very happy things went our way today.

Procedures for travel to Ebola countries from SA

IFP sends its condolences to the ANC