Pretoria, 20 August 2021; In celebration of women’s month, the South African Police Service(SAPS) continues to celebrates its women who continue to make their mark in a traditionally male dominated environment. 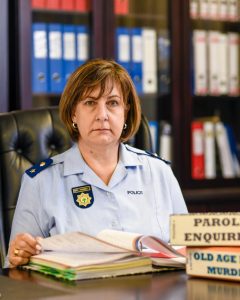 Today, we introduce the nation to Lieutenant Colonel Elmarie Myburgh, one of four female Criminologists in the organisation.

Lieutenant Colonel Myburgh has more than 27 years’ of service, having joined the SAPS in 1994.

She has been attached to the Investigative Psychology Section(IPS) since 1997 as a Criminologist.

Born and bred in Polokwane, Lt Col Myburgh has a BA (Hons) degree in Criminology and Psychology from the North West University.

The member is also in possession of a Diploma in Criminal Justice and Forensic Auditing from the University of Johannesburg.

During her career she has completed various courses presented by international experts on crime scene assessment, criminal behaviour analysis and profiling, investigative interviewing, and violent risk assessment and management.

The member has been actively involved in the investigation of nearly 70 serial murder cases in South Africa and neighbouring countries, as well as more than 90 serial rape cases.

She is currently the only trained profiler employed by the SAPS.

Members of the IPS give advice and assistance to detectives who are investigating such crimes.

She often testifies in the High Court as an expert on behavioural linkage analysis and also compiles pre-sentencing reports.

She also assists Parole Boards in compiling violent risk assessment reports on offenders who are serving life sentences and who are eligible for parole, to determine what level of risk they pose to society.

The member also regularly provides training regarding psychologically motivated crimes to local and foreign law enforcement agencies, prosecutors and professionals from the Department of Correctional Service(DCS).

According to the member to work in this field, one has to be organised and professional at all times.

“In such a field, you can’t judge people, you have to stay objective and merely analyse their behaviour”.

The member has been involved in numerous high profile cases, but the most recent successful case was that of the so-called Facebook serial rapist in Boksburg.

Twenty-three-year-old Thokozani Jiyane raped 10 victims between October 2019 and February 2020. He befriended the victims on Facebook, pretending to be a famous local actor. He promised them work in the entertainment industry or to promote his clothing label. As soon as the victims showed interest, he requested them to send him photos of themselves and they would continue their communication on Whats App. Within a few days, he would arrange to meet them and requested them to travel by taxi to an informal settlement in Boksburg. The victims came from areas as far as Middelburg Mpumalanga, Hammanskraal, KwaMhlanga, Soweto, Vosloorus and Westonaria. Many of them had never been to Boksburg before. Upon their arrival the victims were met by Jiyani, pretending to be a friend of the famous actor who would take the victims to him. He would lead them through a secluded bushy area where he assaulted, strangled, raped and robbed them.

Lt Col Myburgh compiled a behavioural linkage analysis report for the court case. After the accused was found guilty on 17 counts of rape, 10 counts of robbery and various other related crimes, she compiled a pre-sentencing report on the accused’ rehabilitation prospects. Jiyani was sentenced to 8 x life and 223 years imprisonment sentences.

To Lt Col Myburgh and all the other female Criminologists in the organisation, we thank you for working tirelessly in serving the people of this country and for ensuring that perpertrators of psychologically motivated crimes remain behind bars for lengthy periods.

OVER R10.7 MILLION WORTH OF DRUGS SEIZED AND SUSPECTS APPREHENDED

Rhino horns found in Mozambique to be tested in South Africa