In celebration of women’s month, the South African Police Service (SAPS) continues to celebrate it’s women who continue to make their mark in a traditionally male dominated environment. 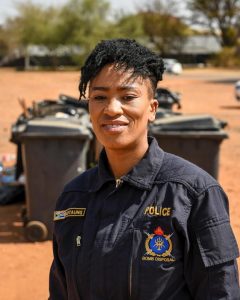 Today, we introduce the nation to Constable Mammokso Motaung, one of eighteen female Bomb Disposal Specialists in the organisation.

Originally from Phuthaditjhaba in the Free State, the thirty-seven-year-old member began her career in the South African Police Service(SAPS) in 2003 as a police reservist attached to the Phuthadijthaba police station.

A police reservist is a member of the community who performs part-time policing functions or activities for SAPS on a voluntary basis without being paid.

In 2005 she applied for a permanent post as an Accounting Clerk at the Parkroad police station in Bloemfontein. Constable Motaung held this post until 2011 when an opportunity arose for her to undergo the Basic Police Learning Development Programme(BPLDP) as a police trainee at the SAPS Tshwane Academy in Pretoria.

After her appointment as a fully fledged Constable, the member was deployed to Phuthaditjhaba to serve and protect her community.In 2016 the member joined the Germiston Explosives Section after undergoing the prescribed training.

With 16 years service, Constable Motaung is the only female attached to the Germiston Explosives Unit.

As a Bomb Disposal Specialist, the member responds to incidents that are bomb related where she identifies explosive devices and defuses them to make them safe.

On a daily basis, the member attends to Bomb incidents which include ATM Bombings, Cash-In-Transit(CIT)heists, Explosives recoveries, Suspicious parcel incidents.

Her primary responsibilities include conducting bomb scene investigations where she handles the identification, collection and examination of evidence.

The member also responds to and assists with investigations regarding any gas, chemical or other explosion which results in severe property damage, injury of persons and death.

When a bomb disposal specialist is needed at a crime scene, the unit commander will be informed.

Only members of the Explosives Unit will respond and are allowed to handle suspect devices and/or recover any form of explosives.

According to Constable Motaung, a member needs to possess excellent thinking and reasoning skills for making
quick decisions at a crime scene.

One also needs to be patient and the ability to remain calm in stressful situations.

“When I arrive at a scene, I command everyone to evacuate the scene because bomb scenes are extremely dangerous. I will firstly approach the scene to find the device, when I’m sure of what type of device im dealing with, I decide which type of equipment I will use for that device. I enter the scene with the equipment and my sole focus is find the bomb, if its already exploded, my responsibility is to collect the evidence. If the bomb has not went off, my job is to dispose it to ensure that it doesn’t explode thereby preserving life”.

“I would like to advise bystanders and communities to always stay away from entering ATM Bombings and CITs crime scenes. As is the case where community members always pick up bank notes at these scenes. These crime scenes can often be dangerous particularly when explosives are used in such robberies. In some instances it is possible that not all explosives were detonated at the time when the robbery was committed. This therefore poses a risk for the detonator to explode in their presence, thereby posing a risk for the loss of life.”

To qualify as a Bomb technician or Bomb Disposal Specialist, a member needs to be in possession of a an NQF6 qualification in Electrical Engineering and/or undergo the prescribed training offered internally.

To Constable Motaung and all other female Bomb Disposal Specialists, we thank you for always risking your lives to ensure the safety and security of all people living in South Africa.

Yet another IFP leader killed in Inanda

DETECTIVE AND A SUSPECT ARRESTED FOR CORRUPTION

Results of the Wilson R100 000 Challenge