The Minister of Police, General Bheki Cele, Deputy Minister of Police, Mr Cassel Mathale and the National Commissioner of Police, General Kheha John Sitole led the delegation of dignitaries from the Ministry, SAPS and the Provincial Government to officially open and hand over a three bedroom fully furnished house to a family of seven in Motherwell NU12, near Port Elizabeth as part of the South African Police Service social responsibility and as a build up to National National Excellence Awards and Police Day annual Celebrations. 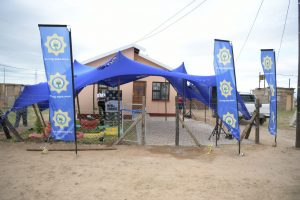 The family headed a 79-year-old Gogo (grandmother), her daughter and five grandchildren aged between six and 16, have been living in a one room shack. Their plight was discovered by SAPS Motherwell’s Social Crime Prevention members while conducting community engagements. The members realised that the shack the family were living in posed serious health and safety risks.

The family was then brought forward as beneficiaries of the house that is given by the Management of Police at the province that hosts National Police Day, SAPS Golf Challenge and National Excellence Awards. This is the fourth family in four years to receive a house as this social responsibility was started at North West in 2017.

The management of the province also saw it fit to find the elderly woman medical care through the help of a local optometrist and a physician to assess her state of wellbeing as her health has been deteriorating. The police went on to get sponsorships for clothing and groceries for the family.

The SAPS strives to prevent crime before it occurs and crimes against women, children and vulnerable groups are a priority for the Service therefore this family’s safety is of utmost importance. This sentiments were echoed by the National Commissioner when he was addressing the community members that were gathered to witness the generosity of the police. “In the SAPS we have Social Crime Prevention which is responsible for identifying and eradicating root causes of crime. uGogo and her grandchildren fall within the category of vulnerable people. Their previous living conditions made them more vulnerable to being victims of crime but with this new house, they are now safe and secure,” explained the National Commissioner.

The Minister told the gathering that today was a day that the management of the Department of Police came to rejoice with the community, especially uGogo Mbinambina as she received a new house. “There are a lot of people in South Africa in the same situation like Gogos who are living under unsafe and unhealthy conditions but God chose you, Gogo out of all those people, to receive this house”, said the Minister and he went on to appeal to the community to work together with the police in the fight against crime.

The Deputy National Commissioner for Human Resource Management, Lieutenant General Bonang Mgwenya explained that the gesture is part of SAPS’ social responsibility. “Each year in a province that we host the National Police Day, we identify a needy family and assist in any way that we can. They say charity begins at home but today charity begins at this house,” she said.

In response to all that was said to the family, the teary Ms Zodwa Mbinambina, Gogo’s daughter, expressed her gratitude to the SAPS on behalf of her mother. She said that it has always been her and her two deceased sisters’ dream for their mother to own a decent house that they and their children can all home. “Today I also say it is the God almighty that made this possible, my mother has lived to see the day when she owns a beautiful house, we are all grateful to the SAPS and to all who contributed towards the building and furnishing of this house,” said Zodwa.

SIX SUSPECTS EXPECTED IN COURT FOR DEALING IN A PANGOLIN