MPUMALANGA – Two suspects aged 23 and 44 were arrested by members of the Mpumalanga Tactical Response Team, the Middelburg based Hawks’ Serious Organised Crime Investigation, Local Criminal Record Centre Witbank and Fidelity Security during the night of Thursday 25 February 2021 for Theft of fuel and tempering with essential infrastructure in Vosman. 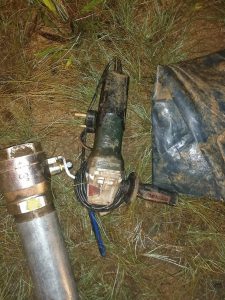 The arrest followed the information received from the drone team who were on duty, working on the pipe lines when they saw suspicious suspects along the Transnet fuel pipe line. The security made an observation and saw the suspects busy digging the ground on top of the Transnet fuel pipe line. The matter was reported to the Fidelity security who summoned the law enforcements. The team arrived and managed to arrest two suspects out of the six, others managed to flee.
During the inspection it was discovered that the pipe line was damaged but no spillage was detected. The equipment used during the commission of crime was seized and will now form part of an ongoing investigation. The suspects will appear before the eMalahleni Magistrate’s Court on Monday 1 March 2021.