GAUTENG – The Gauteng Provincial Head of the Hawks, Major General Ebrahim Kadwa has commended the investigation team on the arrest of two male police Sergeants on travel claims fraud allegations in Ivory Park on Thursday, 22 April. 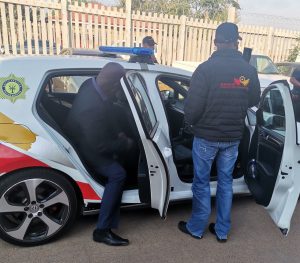 It is alleged that the recently promoted Sergeants at Serious Corruption Offences in Pretoria and Ivory Park detectives, allegedly created fictitious accommodation invoices when travelling for inter-provincial investigations between 2015 and 2018 and submitted them at their police station’s finance office for capturing purposes.
The Hawks’ Serious Corruption Investigation in the province conducted a sting operation this morning where warrants of arrest were executed in Ivory Park.
Further investigation revealed that most of the guest houses’ invoices which the suspects submitted did not exist.
Their employer, South African Police Service suffered a loss of approximately R4 756 on all accommodation invoices submitted by the alleged suspects.
The duo aged 35 and 42 were immediately arrested and charged for fraud and are expected to appear in the Kempton Park Magistrates Court tomorrow.
“The Directorate for Priority Crime Investigation remains resolute to tackle fraud and corruption amongst law enforcement officers who are found to be committing crime. We will ensure that the perpetrators are brought to book without fail”. Major General Kadwa said.

Is Julius Malema our future? – CDP

SA to gain from ocean economy

FORMER SHERIFF IN COURT FOR FRAUD AND CORRUPTION

NATJOINTS in place for the Armed Forces Week in Durban