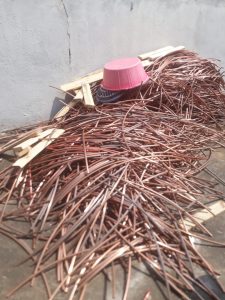 On Monday, 7 December 2020 members received information about stolen copper cables hidden in one of the houses in Newcastle. A search warrant was obtained and the search conducted. Upon searching the premises, Transnet copper cables were found. The copper cables weighing 2140 kilograms with an estimated value of R248 000.00 were seized.

The suspect was questioned about the copper cable and he did not provide any reasonable explanation. He was immediately placed under arrest and charged for possession of suspected stolen property.

He is expected to appear in the Newcastle Magistrate’s Court on Monday, 14 December 2020 for formal bail application.

TRAINING UNDERWAY FOR RESERVISTS AND SECURITY OFFICERS APPOINTED AS CONSTABLES

Latest about the Poliovirus outbreak in Cameroon

World hunger again on the rise, driven by conflict and climate change