* Raven Klaasen through to doubles semi-final 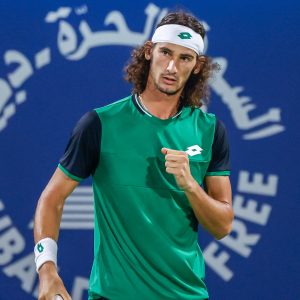 Nadal overcame a lingering foot injury on Wednesday evening to beat home favourite Jack Sock in a final-set tie-break in front of an energised crowd. But the South African would not allow the top seed to work his magic again.
“Today was really special. I think I have had some big wins, and this year I have beat some Grand Slam champions,” Harris said. “But to beat a 20-time Grand Slam champion, and especially in front of a full crowd and with such an amazing atmosphere, it was definitely something very special.”
Harris showed no apprehension early in his first ATP Head2Head clash against the 88-time tour-level titlist. The South African held his ground on the baseline and went hard and flat to Nadal’s forehand, pushing the lefty back as he continued to fire away.
The 20-time major winner has become known for his unrelenting offence and ability to control play with his forehand. But stunningly, Harris hit nine forehand winners to just two for the Mallorcan in the opener, seizing the only break of the set to take the lead.
But Nadal claimed the momentum with one wicked forehand passing shot. The Spaniard broke for 3-1 in the second set with a curler down the line. The lefty took a quick skip and unleashed a massive “Vamos!” as the fans roared. From there, he began to play more aggressively and cruised through the rest of the set as Harris fell further behind the baseline.
The third set, however, became a battle of wills. Nadal did not want to give ground, but Harris was unafraid of the moment and went after his shots to put pressure on the top seed. Screams of “Vamos!” became more frequent from Nadal as he attempted to claw through.
But on his first break point of the decider, Harris did not panic when a Nadal shot bounced off the top of the net. Although he was unable to put away the passing shot, he curled a lob on the next ball over a helpless Nadal’s head.
This was another demonstration of the 24-year-old’s potential. The South African this year became the first qualifier to advance past the Dubai quarter-finals in the tournament’s 29-year history. At that event, Harris won seven matches in seven days to advance from qualifying to the championship match.
Harris defeated Nishikori during that run and he will try to do it again on Friday. The Japanese star beat in-form Briton Cameron Norrie 3-6, 6-3, 6-3 to make the quarter-finals.
“It’s going to be a very tough battle and I think a very different game style than I faced today,” Harris said. “It’s going to be a new challenge and I look forward to it.”
In the doubles event, South African doubles ace, Raven Klaasen and his Japanese partner, Ben McLachlan are through to Saturday’s doubles semi-finals after. Klaasen is the defending Washington doubles champion (2019 w/Michael Venus). The South African is looking to win an ATP Tour doubles title for the ninth straight season.

VF Plus groei met 125% in Potgietersrus

Is Donald Trump the best man to defend America against ISIS — or the one the extremists would like to see in the White House?

SUSPECT BEHIND ALLEGED ARMED ROBBERIES ARRESTED IN THE EASTERN CAPE

SEVEN IN THE DOCK FOR ILLEGAL FIREARMS, DRUGS AND EXPLOSIVES