NORTH WEST – The Hawks’ Serious Organised Crime Investigation assisted by members of Potchefstroom K9 and Mounted unit dealt a massive blow to the illegal drug trade in Potchefstroom when they made a bust worth over half a million at a house in Sol Plaatjie street. 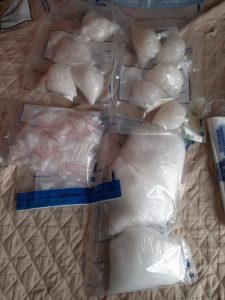 A disruptive operation was conducted by the multi-disciplinary team where the said house was raided and searched. One of the backrooms being rented out was allegedly found harbouring an assortment of drugs including cocaine, dagga, alcohol, crystal Meth and R8000 cash.

Numerous documents including price lists of drugs and alcohol were also found in the room, meanwhile tracing of the suspect is still ongoing.

HAWKS ARREST ONE OF THEIR OWN

Ebola not a threat to SA tourism

WHO Scales Up Response to Humanitarian Crisis in Nigeria