The Department of Water and Sanitation in North West together with JB Marks Local Municipality, has recently completed the construction of a Sewer Rising Main Bulk line which connects the Toevlug sewer main bulk line to the R30 Tshing Sewer Pump Station. 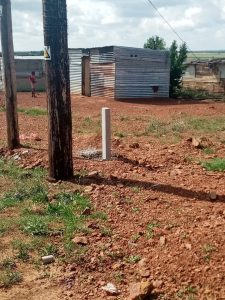 This project is already benefitting 998 households of Toevlug within JB Marks Local Municipality, and it consists of approximately 3.5km (length)/160mm (width) diameter pipes connecting to outside house toilets.

The bulk of the internal sewer reticulation is in the middle of the stands (midblock), with only a few places where the sewer crosses either a stream or a road. The gravity lines then feed into the sump of Toevlug Sewer pump station, where the sewage spills into man made furrow and eventually discharged into the Schoon Spruit river. Therefore, the Department decided to come on board through the Water Services Infrastructure Grant (WSIG) to fund the project.

The existing water reticulation network caters for only the formal stands, and the informal settlements do not have a waterborne sewage.

A total of 15 community members personally benefited in the construction of the project with employment and skills development in hard labour.

Two pump stations in Toevlug extension 7 & 8 were vandalized and needed to be upgraded for the new sewer pipeline to be commissioned. Ratau says due vandalism of the two pump stations, the Department has been forced to find money to the tune of R5 million to refurbish them to ensure services to the community.

FROM THE BRINK OF DEATH

Is KZN premier trying to cover up corruption?

Motion To Remove The President From Office