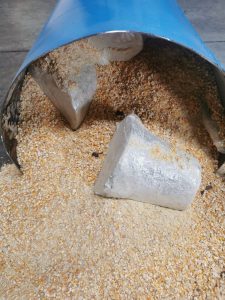 In December last year, Hawks’ Serious Organised Crime in Germiston, Benoni SAPS and the South African National Parks (SANPARK) followed up on intelligence regarding a consignment declared as chicken food mixture packaged in a blue geyser at a warehouse in Kempton Park, containing rhino horns weighing about 72.4 kilograms.
It is alleged that the consignment was intercepted by authorities after being dropped off at a warehouse on the same day. During an investigation, it was discovered that it was destined for Malaysia.
On Saturday, 16 January 2021 further investigation led authorities to a residence in Benoni where a search warrant was executed. Upon searching the premises, authorities found about half a million rand in cash and it was seized for investigation purposes since it is suspected to be the proceeds of illegal dealings.
Chigwede was arrested immediately and charged for illegal dealing in rhino horns and contravention of the National Environmental Biodiversity Act (NEMBA).

The case was postponed to 26 January 2021 for a formal bail application.

Big-hitting Pollard set to return to PPC Newlands next season