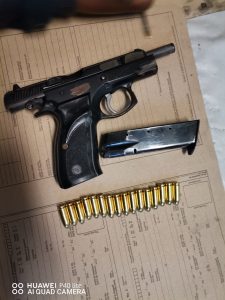 The swift response of Flying Squad members yesterday afternoon led to the arrest of three suspects who had just perpetrated a business robbery in Gugulethu. While on patrol in the area, the members spotted a suspect being pursued by the public, and reacted by arresting the man. They were informed that a sports shop was robbed by suspects who fled with cash and clothing. The further intervention of the members resulted in the arrest of two more suspects, who were caught in possession of the stolen goods and cash. Once charged the three suspects aged between 18 and 21 are scheduled to make their court appearance in Athlone on a charge of business robbery.

In an unrelated police intervention, the Manenberg Crime Prevention Unit apprehended a 35 year old man for the possession of a prohibited 9mm pistol and ammunition last night while doing patrols in the vicinity of Johanna Court. The suspect is also due in the Athlone Magistrates court once he has been charged.

Reckless Driving Must Be Punished Severely

BOGUS LAWYER ON THE RUN