Monday, 03 July 2017, Soweto, South Africa. – Top seeds Evans Maripa and
Kgothatso Montjane remained on course after powering past Thato Tsomole and
Mabel Mankgele respectively to advance to the semi-final round of the Joburg 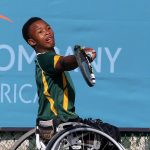 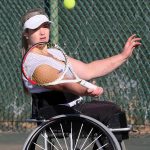 Open at Arthur Ashe Tennis Center in Soweto on Monday.

The world number 12 will go up against top junior Alwande Skhosana in the
semi-final round on Tuesday. The ecstatic 16-year-old dismantled Mayenzeke
Gwija in straight sets 6-2 6-2 and said he will give it his best against
Maripa in the semi-final.

“Evans is an experienced player and it’s always great to play someone of his
caliber. I know it won’t be easy but I will play my best and hope for better
results,” said world number 6 junior Skhosana.

Third seed Leon Els also advanced to the men’s singles semi-final round. Els
defeated compatriot Ishmael Tshipuke 6-2 6-0 to book his place in the last
four where he’ll come up against a much tougher opponent in second-seeded
Yoshinobu Fujimoto of Japan.

Fujimoto defeated Mzwanele Thentsi 6-0 6-1 in his semifinal today to book
his date with Els.

In the women’s event, the country’s leading player and world number 8
Montjane, lived up to the crowds’ expectation as she pulled off a sensation
victory over country-girl Mabel Mankgele 6-0 6-0. Montjane will face former
world number 1 junior Mariska Venter in Tuesday’s semi-final round who
eliminated Nonkanyiso Nyosi 6-1 6-0.

“Great match today against Nonkanyiso, I played my best game,” commented
Venter. “It is not going to be easy playing Kgothatso Montjane in the
semi-final tomorrow but I will bring out my best. KG is ranked number 8 and
has more experience but I am very excited to see the outcome of our match
tomorrow,” added Venter.

In the other women’s quarter-final match, Switzerland’s number 1 Nalani Buob
powered past Kwazulu-Natal’s Nokwanda Hlongwane 6-0 6-1 and next go up
against fourth seeded Veronica Zvik from Israel for a place in the last two.

“I am looking forward to play Veronica tomorrow. It will be our first
meeting ever, so it is going to be a little bit tricky. I have watched her
play today against Nokwanda and still trying to come up with a game plan,”
commented Buob.

Zvik booked her spot in the semi-final by defeating South Africa’s Simpiwe
Manqele 6-0 6-0. The 31-year-old didn’t waste much time and prevented
Manqele from winning any game.

IFP welcomes Phiyega board of enquiry