KWAZULU NATAL – Three of the four suspects who were sought for an armed robbery and murder of a policeman were fatally wounded in a shootout during an intelligence driven operation with members of the multi-disciplinary team including Hawks Serious Organised Crime Durban, Crime Intelligence, Pietermaritzburg K9 and Tactical Response Team. 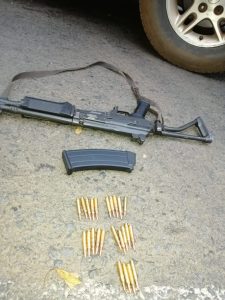 It is reported that on 24 May 2021, Lieutenant Colonel Ndawonde, the acting station commander of Ndwandwe SAPS was off duty and en-route to his residence in a marked state vehicle. Whilst in the vicinity of Bhamshela taxi rank, the Lieutenant Colonel was ambushed by unknown assailants and subsequently shot dead. His vehicle crashed into a nearby fence along the R614 road. Lieutenant Colonel Ndawonde sustained multiple gunshot wounds and his 9mm service pistol and an R-5 automatic rifle were taken by the suspects. A case docket of murder and armed robbery was registered and allocated to Durban DPCI SOCI for investigation.

Intelligence information was received on the whereabouts of the suspects involved in Lt-Col Ndawonde’s murder which culminated into an operation which was executed yesterday. The suspects were observed whilst travelling in the identified maroon Jeep coming from Maqongqo towards Pietermaritzburg. The members stopped the vehicle and the suspects opened fire which resulted in a shootout.
Two suspects jumped out of the vehicle and disappeared in the nearby bushes whilst the other two tried to drive back to Maqongqo but unfortunately the vehicle went down a ditch. Closer inspection revealed that the suspect driver had been fatally wounded. In the continuing shootout, one suspect proved to have been injured as he left a trail of blood as they disappeared into the sugar cane fields. Due to the complex terrain, assistance of the Pietermaritzburg K9 was enlisted. The member of K9 and his dog Shaka entered the sugar cane field following the trail made by the two suspects. One suspect was located and was engaged by Shaka. The suspect fatally shot the dog as he also fired at the members. The suspect was fatally shot when the members returned fire.
Another K9 member with a dog, Simba joined the team in locating the third suspect. Simba engaged the suspect but unfortunately was fatally wounded and so was the suspect. The suspect was found to have been in possession of an unlicensed firearm. With the assistance of the Airwing and another K9 member with his dog Duke tracked the fourth suspect. The suspect shot Duke and managed to flee deeper into the dense bushes. K9 dog Duke, was airlifted to hospital for urgent medical assistance and is recovering.

The team also recovered four unlicensed firearms including an R4 rifle, an R5 rifle and two 9mm pistols, live rounds, one dashboard blue light and a box of ammunition. Thirteen (13) counts of attempted murder, possession of unlicensed firearm and ammunition, malicious damage to property and inquest dockets were opened for investigation.
The Provincial Head of DPCI in KwaZulu-Natal, Major General Lesetja Senona lauded the multi-disciplianary team for ensuring that justice has been brought to the Ndawonde family. He also sent his condolences to K9 Pietermaritzburg for the loss suffered with the demise of Shaka and Simba in the line of duty. “ We shall continue to ensure that communities are protected from these criminals and justice prevails”, he said.
In the aftermath of the incident, it was discovered that two of the deceased suspects were on the run after absconding from the Durban High court holding cells on the 26 March 2021 when they were found guilty of five murders and an attempted murder in Marianhill. The two were allegedly involved in the massacre of six people, five of which were certified dead on the scene and the sixth was critically injured in October 2017. The two were arrested by the Provincial Organised Crime which successfully opposed their bail. When they were arrested, they found in possession of three unlicensed firearms and ammunition. Their trial began on 22 February 2021 until 26 March 2021. During the recess after they were found guilty, the two escaped before they could be sentenced which was to happen after recess.

Further investigation is continuing in locating the fourth suspect who is still at large.

DRUGS WORTH MORE THAN A MILLION SEIZED BY POLICE, SUSPECT IN CUSTODY

Cash in transit foiled in Mpumalanga