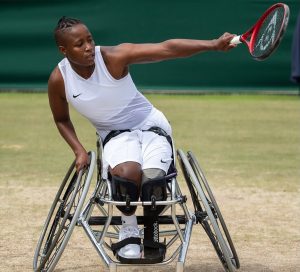 Facing top seed Diede de Groot of the Netherlands, Montjane made history in the match by becoming the first black South African woman to compete in the trophy decider at the All-England Lawn Tennis Club.
De Groot utilised her experience throughout the contest, however, retaining her composure under pressure to secure her third Wimbledon title with a 6-2 6-2 victory.
On Saturday, the 35-year-old from Seshego in Limpopo and her doubles partner Lucy Shuker from Britain lost in the women’s wheelchair doubles final.
The duo lost to Japan’s Yui Kamiji and Great Britain’s Jordanne Whiley 6-0, 7-6.
Though she did not bag her maiden Grand Slam crown, Montjane took a big step forward in her career.
After reaching the semi-finals at the Australian Open and French Open tournaments earlier this year, her latest performance at Wimbledon will no doubt raise her confidence ahead of the US Open later this season.
The world No.5 will represent South Africa at next month’s Paralympics in Tokyo, which is scheduled from 24 August to 5 September.

SAPS response to the president’s statement on the Marikana report

OVER R10.7 MILLION WORTH OF DRUGS SEIZED AND SUSPECTS APPREHENDED

Tobacco and COVID-19 WHO Statement

Police in Gauteng on a manhunt for cop-killers