Malaria outbreak in Limpopo and Mpumalanga

Following the malaria outbreaks in Limpopo and Mpumalanga provinces, there has been daily monitoring of the developments through the district outbreak response meetings. However, the overall number of reported malaria cases has declined in the provinces of Mpumalanga and Limpopo over the past two weeks.

There have been a high number of malaria cases in South Africa in the 2016/17 season, compared to the previous season. This has been attributed to the rise in ambient temperature, rainfall and humidity. The outbreaks were reported in Mopani and Vhembe districts (Limpopo) and in the Bushbuckridge subdistrict of Mpumalanga in early May 2017. Please note that the Kruger National Park is a known malaria risk area, and travelers to malaria transmission areas in South Africa (see malaria risk map), as well as to the neighbouring countrie 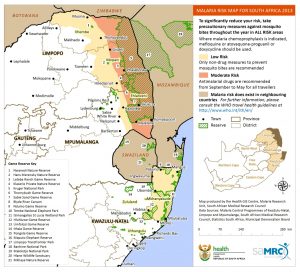 s, are advised to take precautions against malaria.

Any residents or travelers from both low and high malaria risk areas in South Africa (see map) presenting with fever and flu-like symptoms are strongly advised to attend a healthcare facility or see their doctor for a malaria test, even if chemoprophylaxis was taken. A negative malaria test must be treated cautiously and repeated. Any person with a travel history to a malaria risk area who presents with fever and flu-like symptoms is unlikely to have influenza at this time since it is very early in the 2017 influenza season.

WHO responds to increasing health needs in Aleppo, Syria

FIVE SUSPECTS ON DOCK FOR STEALING R5 MILLION WORTH OF FUEL