Roland Garros, Paris, 28 May 2021 – On Thursday, in Paris, the draw gods had their say. Now, the rest is up to the players, who will take their place in the 128-player men’s and women’s singles fields when main-draw play begins at Roland Garros on Sunday. 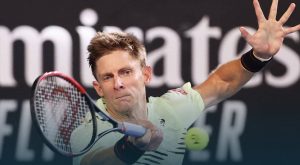 South Africa’s latest tennis star, Lloyd Harris, has landed in a tricky spot in the draw, a section loaded with experienced clay-court players.
The 24-year-old will open his campaign on Sunday against a challenging opponent in 26th seed and world No. 28 Lorenzo Sonego from Italy.
The in-form Harris will be hoping to go a step further in this year’s event after finishing in the round-of-64 in 2020.
Earlier this year, he won hearts with an inspired run to his maiden ATP 500 final at the Dubai Tennis Championships, after progressing through qualifying to claim seven wins in seven days as he reached the final. The Capetonian earned the two biggest wins of his career en route to the championship match against World No. 4 Dominic Thiem and then World No. 12 Denis Shapovalov.
Harris, who broke into the top 50 of the ATP singles rankings earlier this year, could face British world No. 45 Cameron Norrie in the second round.
Norrie recently stunned Thiem in straights sets in Lyon, and he will open his account against a qualifier, yet to be named.
If all goes according to plan, Harris could come up against 13-time champion Rafael Nadal in the third round.
Nadal opens his campaign against Australian world No. 62 Alexei Popyrin.
Meanwhile, South Africa’s other participant in the singles division, Kevin Anderson, will kick off his campaign against South Korea’s Kwon Soon-woo, who is 90th in the global rankings, on Sunday.
Former world No. 5 Anderson is currently 97th in the ATP rankings.
The doubles draw will be released on Sunday, May 30. South Africa’s renowned doubles star Raven Klaasen and his Japanese partner Ben McLachlan will be in action.