GAUTENG – The Gauteng Head of the Hawks Major General Prince Mokotedi said expressed shock and disappointment by the arrest of the two members of the Hawks and a detective following the arrest by the Serious Corruption Unit on Monday. 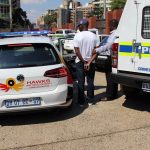 The three, Warrant officer Tefo Maimane (49), Warrant officer Eric Melaphi (41) both attached to the Hawks Serious Commercial Crimes and Detective Constable Khumbulo Gadivhana (36) from Hillbrow SAPS, are accused of having connived and allegedly stole R1 million in an armed robbery in Edenvale and Hillbrow respectively. The fourth suspect is still outstanding and efforts to track him down are underway.

Their arrest follows allegations that during September this year, four police officials driving in two vehicles stopped a motor car in Norwood alleging that the driver was driving recklessly. The driver insisted that they proceed to the nearest police station. He was hauled to Norwood police station where a search was conducted and four allegedly found two boxes full of cash including a receipt indicating the total amount which the victim had exchanged for his employer.

The suspects allegedly left the police precinct and proceeded to Johannesburg Specialised Commercial Crimes Court building on Ellof Street in an police escort. They allegedly offloaded the two boxes and entered one of the offices where they shared a R1million and returned the remainder to the driver.

An investigation ensued after the matter was referred by the SAPS to the Hawks which culminated to the arrest of the three on Tuesday.

Hawks provincial head, Major General Mokotedi expressed his gratitude and congratulated members for the courage of arresting their own.

“Since we implemented a zero tolerance to corruption, we have arrested hundred and two (102) police officials in Gauteng from March 2016 to date. Serious Corruption Investigation Unit was beefed-up with eighteen members and we are now reaping the fruits of arresting corrupt individuals.

“I want to warn unscrupulous members that we will not relax until the Hawks particularly in Gauteng gets rid of all the bad elements. The blue wall is greatly impeding our success to tackle organised crime. Once broken, our progress to bust crime syndicates will be accelerated,” he said.

Meanwhile, the trio Maimane, Melaphi and Gadivhana appeared briefly at the Johannesburg Magistrates Court on Tuesday and their case was postponed to 27 December 2017 for a formal bail application.

Ins and outs of Islamic Banking