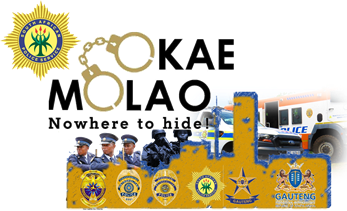 PARKTOWN – The Gauteng Acting Provincial Commissioner, Major General Andre Wiese, commended the detectives for securing a three life sentences and a combined 194 years imprisonment just in one week. These convictions are after the arrests of 20 perpetrators who were charged with various crimes including murder, attempted murder, rape, house robbery, business robbery, car hijacking, culpable homicide and theft.

The life sentences were handed down to two accused who were convicted for murder and attempted murder committed in Randburg in 2016. The accused were accosted by the police after information was received that they had just committed a robbery. As the police were stopping their vehicle, the accused fired shots at the police. During the shootout one suspect was shot and killed. The accused’s vehicle collided with the motor bike and the biker succumbed to injuries.

Thorough and diligent investigation by members of Family Violence, Child Protection and Sexual Offences Unit led to the conviction of three accused who were charged with rape. One accused was sentenced to life imprisonment after he was convicted of raping a 10-year-old child in Katlehong in 2017. Other rape convicts were sentenced to 20 and 10 years imprisonment for rape they committed in Ratanda and Katlehong. The South African Police Service continue to prioritise cases that involve women and children, also to ensure that the perpetrators pay a heavy price for their evil deeds.

The criminals who forcefully dispossess the community their rightful valuables were also hunted down by the detectives and sent to prison for a long time. A man accused of hijackings in Hillbrow and Yeoville was found guilty of two counts and sentenced to 15 years imprisonment while a man who was found guilty of house robbery in Sophiatown was sentenced to 20 years imprisonment.

“The lengthy sentence handed down to each of the accused is most welcomed as this will send a clear message to the criminals that the end results of their criminal activities is to spend many years in prison. I would also like to thank the witnesses who are willing to corporate and help the police in collecting all necessary evidence needed by the court in order to prosecute and convict the accused” said Major General Wiese.

BUSINESS PARTNERS ARRESTED AFTER FAILURE TO COMPLY WITH COURT ORDER

Results of the Annual TSA Series

Vhusha: I am a woman