The operations by the Stabilisation Team deployed in Plessislaer and Pietermaritzburg are continuing on a high note. 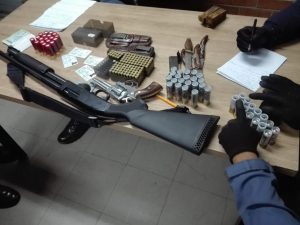 This was followed by an operation that was conducted last night in the Plessislaer police precinct. The team proceeded to a house in Mpumuza where a 47-year-old man was found on the premises. Upon searching the house the suspect was found in possession of illegal firearms which consist of a rifle, shotgun and pistol.

A further two licensed firearms, which consists of a shotgun and a revolver, was seized by police for further investigation. Police seized 100 rounds of ammunition from the suspect. The suspect is appearing in the Pietermaritzburg Magistrates Court today on charges of unlawful possession of firearms and ammunition.

Woman in the dock for R5 million fraud