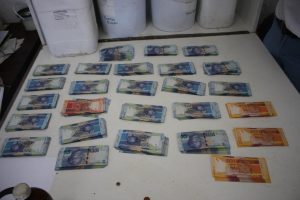 De Beer who is a major supplier of dagga around the country was previously arrested in 2019 when his shop (Canapax) was raided and dagga with other products worth approximately R3 million were seized. The operation led the team to various Canapax branches around the country which were shut down.

During the search on Tuesday, R2 million worth of dagga, R54 000 in cash and a Toyota bakkie were seized. Meanwhile a preservation order was issued for cash amount of approximately R800 000 and a restraint order for a farm worth approximately R3 million.

The main accused now faces an array of charges which include, dealing in dagga, cultivation of dagga, fraud and money laundering to the tune of approximately R10 million.

A fourth accused, Ulrich Fritz (25) handed himself over and consequently joined the trio in court where De Beer and Mogale were each released on R100 000 bail. Steyn and Fritz were each granted R10 000 and R5000 bail respectively. The matter was postponed to 9 July 2021 pending further investigation.