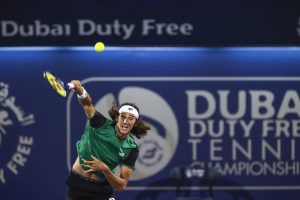 After defeating top seed Dominic Thiem of Austria in the second round, Harris went on to sweep aside former US Open finalist and Olympic bronze medallist Nishikori in the quarter-finals.

Though Nishikori fought back in the second set, Harris held his nerve to earn a convincing 6-1 3-6 6-3 win.

The 24-year-old South African will have another opportunity for a career breakthrough in the next round, as he goes in search of a place in his first ATP 500 series final.

He faces third seed Denis Shapovalov of Canada in the semifinals, for a place in this weekend’s trophy contest.

“I’m really happy to get these big wins under my belt, and I’m looking to keep building on this confidence, keep improving on my game and playing better tennis,” Harris said after the match.

“It’s been a fantastic week so far. I’ve been playing some high-quality tennis, and it’s been a lot of matches, but I’m not over the finish line just yet.

188 676 people are in need of health assistance

Reckless Driving Needs To Be Addressed At All Levels

Low Youth Turnout At Voter Registration Is A Symptom Of Disillusionment

MARULENG MUNICIPAL OFFICIALS AND COMPANY DIRECTORS DUE IN COURT FOR CORRUPTION

SUSPECT ARRESTED FOR FRAUD OF ALMOST A MILLION RANDS