KWAZULU-NATAL – On Wednesday 15 September 2021, Poobalan Govender (41) briefly appeared in the Phoenix Magistrate’s Court and was released on bail following his arrest by the Hawks members from the Durban Serious Organised Crime Investigation and Durban Metro Police Drug Team. 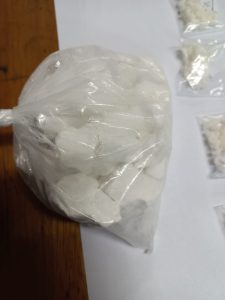 Members received information about a suspect who was dealing in drugs at Phoenix area. An intelligence driven operation was then conducted and Govender was intercepted in Greenbury whilst on his way to deliver drugs. When his vehicle was searched, 361 pieces of crack cocaine and 100 grams of cocaine powder with the street value of approximately R86 100 were found.

Govender was subsequently arrested and charged for dealing in drugs. He was granted a R3 000 bail and the case was postponed to 3 November 2021.

Be aware of bogus website advertisements on saps traineeship and vacancies

SEVEN SUSPECTS APPEAR IN COURT FOR POSSESSION OF ILLEGAL EXPLOSIVES

Municipal manager in dock for illegal dealings worth R5 million